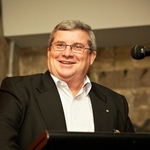 There's an old Russian proverb 'You live as long as you are remembered'. If you don't put pen to paper you'll soon be forgotten or worse your detractors will tell your story for you. This online publication is intended more like a monograph comprising a series of reflections on my life rather than an autobiography. It's all my own work - no 'ghost writer' or paid author. The world abounds with phonies who can barely string a sentence together, pretend they are an accomplished author or engage in public commentary including on polling when they wouldn't know their arse from their elbow.

This is my story, my yarn dedicated to my parents Les and Pam Stone for their example1 and to my wife Josephine,2 children Jack and Madeleine for their support, encouragement and indulgence. It is also dedicated to my friends and colleagues for their loyalty and the CLP and Liberal Party memberships for giving me a go. I am particularly pleased to be able to publish my reflections in 2014 - the 40th Anniversary of the founding of the CLP and the 70th Anniversary of the founding of the Liberal Party of Australia. I am privileged to have been honoured by both the NT CLP and Victorian Division of the Liberal Party as a Life Member - probably breaks the rules but so be it. I proudly carried the CLP banner in every election I faced, without the CLP I would never have had a Parliamentary career. Members of Parliament who thinks its all about them and a ‘personal following’ are kidding themselves.

I never thought I was the smartest bloke in the room - I listened and learned from others. Unlike some ‘smarties’ who enter the political arena with success, wealth and trappings to their name I didn’t have to unlearn being clever - I was never clever to start. I had to learn the ‘trade’ from the bottom up. I watched, listened and paid attention and in the process learned. I have always been mindful that we are all quickly forgotten as the generations roll on. Gough Whitlam once observed:3

“It is a truism, perhaps, that the importance of a historical event lies not in what happened but in what later generations believe to have happened”.

I have been ever mindful of that astute observation. Not for one moment was I ever going to allow others to write my history. So I put pen to paper to tell my story - my yarn. For those who don’t like it or disapprove go write your own.

Overall life has been a roller-coaster complete with career highs and lows. My premature retirement as Chief Minister was difficult but I took it in my stride. The personal ambition of others desperate for Ministerial office ultimately overtook me. There was no sniping or destabilisation on my part as I chose to exit. As Graham Richardson has remarked from time to time, ‘‘the mob work it out’’, and they did. Many of my political protagonists were consigned to the political waste bin at the following Territory election and my successor wears the ignominy of being the first CLP Chief Minister to be defeated after 27 years of conservative government. The former Foreign Minister in the Hawke and Keating Governments, a man I admire, wrote to me on my retirement:

“I have had occasion to remark, politics is a bloody and dangerous trade – an abattoir, in fact – and I guess it is only a matter of time before each one of us suffers that experience’’.

That said I am happy where I landed and remain enormously grateful to all who have encouraged me along the way. To those who tried to derail my political career thanks for honing my determination - I wear your antipathy and loathing as a badge of honour. As stated above to my ‘political tribe’ the CLP I owe a special debt. They gave me an opportunity; the Liberal Party did likewise. I carried their brand and that was the key to my electoral success. Put aside high office, academic excellence, awards and decorations my greatest achievement remains my children Jack and Madeleine.

To the professional writers, editors and grammar experts, and those professional historians who contacted me to express disappointment they didn’t get the gig to write the story, apologies - I wrote it as I speak. It’s meant to be my yarn.

Next: Chapter 1: Setting the Scene