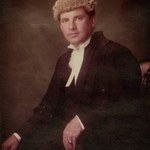 The practice of law in a liberal democracy is fundamental to many of the freedoms we Australians take for granted. A matter of controversy and conjecture is the view that Australia adheres to Judeo Christian principles within the framework of British institutions of Government including the common law we have adopted as our own. I have always believed that to be the case - it is not as some would claim recent invention. With the above in mind, I was determined to graduate in law and practice; the latter does not always follow these days.

A Step in the Right Direction

On one view, I was where the Christian Brothers, that great Catholic teaching congregation had always intended; notwithstanding some thought, I would make a good carpenter, here I was another Catholic in the law. I had worked out that the best pathway to that elusive parliamentary career was the law. Parliaments are full of lawyers: on the Labor side, lawyers, teachers, trade unionists and careerist ministerial advisers. The conservative side of politics has its share of lawyers, career ministerial advisers and apparatchiks. The lack of diversity among sitting members at all levels of politics is an ongoing trend. Parliaments need a wider diversity of occupation and backgrounds to be truly grounded and representative. As a lawyer, at least I could read the legislation and make sense of it. Having embarked on a law career, I never had any intention of seeing out my working life as a lawyer or teacher as will become evident. Law was always going to be a means to an end; the political arena. That said years appearing and arguing the toss in court proved an invaluable preparation for parliamentary debates. The skill of the advocate speaking without notes is a formidable skill set; the ability to persuade a jury a valuable precursory to engaging with the wider electorate. Even my fiercest political opponents concede I had no equal in the Assembly when it came to debates; I owe all that to the law.

Given my background as a teacher with a love of the social sciences, evidenced in my studies at the ANU, I read with some interest David Runciman review of the book by the vanquished Canadian Liberal leader Michael Ignatieff who wrote ‘Fire and Ashes: Success and Failure in Politics’. Runciman observed in his book review:1

'’The great German sociologist Max Weber thought that certain professions were not well suited to making the switch to a career in politics. One was professional soldiers, who were prone to become schematic and unimaginative politicians. Another was academics: far too thin-skinned and unworldly for the rough-and-tumble of political life. Weber thought the best way to learn about politics was to do politics. But failing that, the likeliest background for a successful politician was either the law or journalism. Both these professions had the advantage of teaching ruthlessness combined with adaptability”.

Just as well I ditched the sociology career for law and didn’t persevere with the military where I had commenced at RMC Duntroon in 1969 straight from school. Notwithstanding I spent decades in the Reserve culminating as Head of Panel, Navy Legal NT and NW Australia retiring with the rank of Commander in the Royal Australian Navy Reserve in 2017. I believe I avoided the ‘‘schematic and unimaginative’’ tag.

Starting out in the profession

I enjoyed my time in the profession, particularly at the Victorian Bar. There was a great sense of collegiality and every day was different. Often briefed at the last minute, driving out to Magistrate courts in the suburbs and country centres were all part and parcel of starting out as a barrister interspersed with occasional appearances in the County Court or before some obscure Tribunal added to the intellectual challenge. That said, my practice and legal background have been consistently misrepresented by my political opponents including that partisan cabal of Labor lawyers aided by their fellow travellers in the ABC. There are not too many groups I despise but they are right up there. For years they have sought to portray me as a small town hack solicitor from Alice Springs. For years I put up with this nonsense including from some who should have known better. I could have fought back harder but when it comes down to it, the punters don’t pay much attention to lawyers so why bother. The legal profession abounds with petty individuals who jealously seek to diminish the achievements of others particularly if they are of the wrong ‘political persuasion’.

When Nicola Roxon was appointed the Federal Attorney General the usual suspects were quick to point out that she was well qualified for the task as, among many things, she had been an Associate to a High Court Justice. I remember reading that and almost choking on my corn flakes. Here was a new benchmark for senior appointments in the law and, on that note, I’ll take the time to spell out my legal career for the record since my legal career has been regularly disparaged by my political opponents over time.

I came to law as a mature age student, a former primary school teacher. Initially rebuffed by Melbourne Law School I started at the Australian National University before transferring to Melbourne based on my academic record. On graduation from Melbourne Law School, in my final year 1980, I shared the University Exhibition in Problems of Proof (advanced laws of evidence Maddern Prize). I am pleased that I ultimately made it onto the MLS Honour Board. Thereafter I attended the Leo Cussen Centre for Law in 1981 to satisfy the professional Admission requirements for the State of Victoria and the High Court of Australia.

Later that same year I commenced employment as Associate to Sir Edward Woodward AC OBE2 in the Federal Court (he also held Commissions in the NT and ACT). During that time, I travelled Australia extensively with Justice Woodward as Royal Commissioner into the Australian Meat Industry3 and thereafter worked for him in the Melbourne Registry of the Federal Court4 before applying to the Victorian Bar to complete the Bar Readers Course. I subsequently signing the Roll of Counsel on 1 December 1983. I was admitted as a Barrister & Solicitor in Victoria and the High Court in 1981 following the completion of Leo Cussen, the Northern Territory in 1982 and NSW Bar and Tasmania in 1984. I initially practised at the Victorian Bar5 having read with leading Melbourne ‘junior’ Richard aka Dick Stanley6. I greatly revered Dick as a Master and teacher; I was his last reader before he took ‘silk’. I remain most grateful to have shared his chambers albeit for a short time. I appeared regularly in Victorian, Southern Riverina NSW Courts and on circuit in the Northern Territory. I appeared in the criminal and civil jurisdictions and was at times briefed by the Katherine Regional Aboriginal Legal Aid Service (KRALAS)7 and the Northern Australian Aboriginal Legal Aid Service (NAALAS) on matters principally within the criminal jurisdiction. Before moving to the Territory, I conducted a typical juniors practice ranging between Magistrates Courts, the County Court and Family Court with an occasional appearance in the Supreme Court.

In the mid -1980s enthralled by my NT experiences on circuit Josephine was ‘dragged screaming to paradise’. We packed the trailer, put our comfortable Edwardian home on the rental market, vacated my prestigious rooms at Latham Chambers, said farewell to disbelieving friends and colleagues and ‘went north’. Josephine sacrificed her blossoming career at Landers & Rogers. We were on an adventure that’s not over yet. In Alice Springs I practised as an amalgam in the tradition of South and Western Australia only undertaking appearance work as a barrister or in house Counsel from 1986 to 1989 and, thereafter, in Darwin. For years I was the sole private practitioner who serviced Tennant Creek, a township of colourful and enduring individuals. Josephine and I moved to Darwin in 1989 to open a branch office of our law firm Buckley & Stone where I continued to act as in-house Counsel up until my election to the Legislative Assembly in 1990 8 I am very happy to be associated with the Alice and Central Australia and my time there in the profession; if that makes me an Alice Springs ‘hack’, so be it. I note this accolade was bestowed by a couple of visiting Counsel from Darwin who regularly came off second best on my turf. Their simmering professional resentment combined with their political allegiance made for, at times, an interesting encounter at the Bar table. I hope that clears up any misunderstandings contrived or otherwise assisted by the ABC.

I served two terms as the Attorney General of the Northern Territory and as the NT ‘s First Law Officer took ‘silk’ sending my detractors into an apoplectic fit akin to a Shakespearean tragedy. As the First Law Officer, I was appointed one of Her Majesty’s Counsel for the Northern Territory by His Honour the Administrator the Honourable Dr Neil Conn AO on the advice of the Executive Council in my absence on 4 October 1997. As the First Law Officer, I was so entitled and consistent with other Attorney Generals around Australia, State and Federal who have exercised the privilege (think the Hon Frank Walker QC NSW and the Hon Gareth Evans QC Commonwealth). Contrary to the urban myth and Wikipedia I did not appoint myself. In a subsequent conversation with the Honourable Dr Neil Conn AO, former Administrator of the Northern Territory (1997-2000), he confirmed he approved the Commission having made all due inquiry and satisfied himself that it was in order. He further confirmed he was not lobbied over the appointment, had no conversation with me prior to or following the appointment which was recommended by the Executive Council in my recorded absence. Dr Conn’s predecessor the Honourable Austin Asche AC QC, a former Chief Justice had declined the appointment of another applicant during his term against the recommendation of the Executive Council, as was his prerogative. The appointment of one of Her Majesty’s Counsel for the Northern Territory aka Queens Counsel or ‘silk’, was at the sole prerogative of the Administrator of the day. I chose not to return to the law after retiring from Parliament but rather used my extensive legal experience as a professional non-executive director in the corporate sector worldwide. That was a very fulfilling and rewarding career move.

To complete the yarn I capped off my legal career with a number of other highlights. In 1995 I took a brief sabbatical from the Legislative Assembly to be appointed a Visiting Fellow at the Lauterpacht Centre for International Law Cambridge University. In 1996 I was made an Honorary Life Member of LAWASIA in recognition of my active support for the Rule of Law in Asia and the Pacific. In 2016 I was appointed Inaugural Chairman of the Centre for Military & Security Law at the Australian National University Law School. On balance not bad for an ‘Alice Springs’ hack.

Our daughter Madeleine has followed Josephine and me into the law and tread the same path as I in securing an appointment as Associate to a Federal Court Justice. Madeleine achived a first class Honours Degree in Law. I am confident that Madeleine will enjoy a very fulfilling career in the law in the years before her.

Next: Chapter 7: Moving to the NT