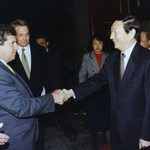 In the world of commerce opportunity invariably knocks once. This is not well understood by those in Government - particularly so when Government is attempting to act as a facilitator. The historic NW Shelf LNG deal with China was one such example. LNG remains a competitive market and the NT is well placed to play a role building upon the success of CONOCOPhillips and INPEX.

Before concluding on my business career, which still has a way to go, the tale would be incomplete if I were not to touch on something which still sticks in my ‘craw’. Much has been written about the first sale of LNG to China all of it sourced from WA.1 The historic $AUD25 billion sale2 from the North West Shelf represented a high point in my commercial journey and a low point in the NT’s engagement with China. This transaction needs to be seen in the context of some important background that has either been forgotten or air brushed out of the corporate memory of the NT Government. In the early 1990s, the emerging economy of China still relied entirely on coal, hydroelectric power, diesel and nuclear fuels. With the encouragement of Dr. Roland Williams3, Chairman of Shell, I joined with the Premier of Western Australia Richard Court to craft a strategy to sell gas to China. On two occasions we lead delegations to China to hold detailed discussions with then Chinese Premier Zhu Rongji and senior Chinese Ministers including Zeng Pei Yan Chairman and Senior Engineer State Development and Planning Commission (SPDC).4 Zeng later went onto be elected a Vice Premier. The SPDC had the carriage of the ‘Cabinet Submission’ to the Chinese leadership (see also Archives Images).

The Northern Territory Government commissioned and paid for the feasibility study into China’s utilization of gas for the purposes of power generation. The Northern Territory Department of Asian Relations and Trade devised a preliminary strategy to sell gas to the Chinese. Later, the Western Australian Ministry for Resources provided the technical expertise necessary to progress the project. I hope the reader is getting the drift that what was on foot here was a constructive NT/WA working partnership – not the figment of my imagination. Both Richard Court and I were present in Beijing at the invitation of Premier Zhu when the State Council5 announced the decision to expand the Chinese energy profile to include gas.

WA and the NT were in the box seat to capitalize on this fundamental shift in Chinese policy. Former Australian Ambassador Rick Smith has documented the background and breakthrough in subsequent media interviews (see Archives Documents).6 Thereafter Australia was required to compete in an open tender process notwithstanding the idea had been initiated by us.7

Last year, Chief Minister Giles was reported to have said the Territory is starting ‘’two steps back’’ in developing relationships with China. He apparently was conceding that the NT had ’dropped the ball’ with China in recent time8 - he is correct. Chief Minister Gile’s challenge is to do something about it. Burke disengaged, Martin dismantled and Henderson discovered Japan. To his credit Kon Vatskalis flew the Territory flag where ever he could but with little support from his Labor colleagues. In Opposition Terry Miles remained true to the CLP legacy but was slapped down by Labor and ultimately his own mob.

This is a tragedy of monumental proportion for the NT. It’s also bad business because, simply put, Japan is not and never was the only game in town. WA knew that and while they held contracts with Japan, they sought to diversify their customer base to include Korea and China. Gas is sold in a global marketplace and the world players will go wherever they have to for a project. This was clearly lost on Clare Martin and her successor Paul Henderson. I can assure the reader in the interests of the NT I did try with both of them. Clare Martin came to my office in Briggs Street to have a wide ranging discussion about the gas industry. She left with material that was meant to be helpful. Paul Henderson agreed to see me and I gave a written briefing on a range of matters relating to our engagement with the region. He politely thanked me for my visit. I was therefore somewhat surprised when on 18 October 2005 Deputy Chief Minister Paul Henderson stood in the NT Legislative Assembly to berate and diminish the effort of CLP Ministers in Asia (ironic given he would end up consulting to a CLP Government). It was a shabby, misinformed commentary made under Parliamentary privilege.

Henderson’s Ministerial Statement ‘New Central Agency to Drive Economic Development in the Northern Territory’ flagged the new Department of Business, Economic and Regional Development or DBERD.9 It also afforded the Labor Government the opportunity to strut about and make certain claims about the gas industry (as spurious as they were) but such is the nature of the political contest. The Ministerial Statement warrants close reading; the response by Terry Mills raised a number of issues that remain important in the Territory. The very favourable terms of the deal cut with INPEX among them. Henderson seemed reluctant and incapable of acknowledging the role of former CLP Governments in laying the foundation for the NT gas industry. He might have had regard for Simon Crean’s speech referred to earlier making the point as with all great projects and initiatives there are many ‘well diggers’ instead of descending into an unworthy tirade against those who came before him. The debate included a series of untruths, innuendos and unsubstantiated allegations all made under Parliamentary privilege (reluctance to make such statements outside the Assembly usually bears out that the claims are untruthful). In Reply to Mills contribution Henderson said:

‘’He (Mills) then went back to talk about the previous administrations and Chief Ministers and ministers swanning around Asia, and what a great job they did promoting the Northern Territory. Again, let us look at the history. Let us look at what was actually achieved. Shane Stone, yes, did spend a lot of time with Richard Court in China. However, let us look at the history of that; it was all about train two and train three for the North-West Shelf. It had nothing to do with gas from the Northern Territory; it was all about Western Australia. If you then follow Shane Stone’s career in the private sector and who he actually has ended up having major consultancy contracts with, and look at the operators on the North-West Shelf, you can certainly see who benefited from all of that travel to China. It certainly was not the Northern Territory. It was one Shane Stone QC who benefited very nicely on his retirement from Territory politics from all of that travel to China’’.

What that statement demonstrated was that Henderson, as with his predecessors, could not grasp the opportunity before them when it came to China.

Relative to the existing operations of the NW Shelf, the NT was largely a ‘greenfield’ proposition with changing ownership and, in a relatively short period of time, ConocoPhillips were on the scene as were INPEX. It begs the question as to why Henderson and others would shun China. All of my work in China was on offer – all Burke, Martin and Henderson needed to do exclusive of me was to pick up the threads. Premier Court was prepared to honour the commitment and if I recall Burke did accompany him on a trip to China but came back unconvinced. In the few months I remained in the Assembly I tried hard to engage Burke but some around him would have nothing of it; first it was a Stone project and second too ‘blue sky’ for those lacking the imagination to develop long term policy and strategy. These were the same people who took the CLP to its first electoral defeat. Western Australia was locked in to work with the NT regardless. WA did not terminate the relationship – the NT did. Henderson confined his attack to Mills although others had previously spoken, including Burke, who made no attempt to defend the CLP legacy.

Henderson’s statement ‘’it was all about train two and train three for the North-West Shelf. It had nothing to do with gas from the Northern Territory; it was all about Western Australia’’ underscores how little he grasped of what was on offer. Nonetheless, when the INPEX deal was sealed I wrote to Chief Minister Henderson congratulating him on the outcome. He seemed surprised, almost taken aback to receive my correspondence. It was consistent with my belief that in all great projects there are many ‘well diggers’.

It is now a matter of public record that, through the consulting firm Bespoke dating from April 2013, Henderson worked for the CLP Government (his Government was defeated in August 2012). No doubt his extensive travel to Japan at taxpayer expense worked very nicely for him in his new consultancy less than 12 months after the fall of the Government he led. The majority of CLP members were confused by the appointment. I can only put it down to political naivety that the Giles Government disinfected the ALP financial mismanagement of the NT by engaging Henderson through Bespoke. One thing for sure is that the CLP Government cannot attack the former Labor Government’s strategy (or lack of it) in Asia for the same reason. Do they not understand that they surrendered the right to forensically criticize their political predecessor? Does the Giles Government not understand that the key to persuading the electorate that you deserve to govern turns on your own competence – that’s not something you can contract out.

The question Territorians should be asking is, if the Henderson Government was as inept as we now know, why was Henderson through Bespoke engaged by Chief Minister Giles? The question for the CLP is whether it was acceptable for Henderson to campaign against the election of the Abbott Government and if Bespoke is still engaged is he free to campaign against the CLP come the next NT election? As to whether Bespoke and Henderson have an ongoing role with the NT Government is unclear. I am left wondering who has charge of political strategy on the 5th floor.