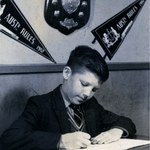 I never thought I'd write a book, still don't. Who's got time to write books except Bob Carr? Finally I succumbed to jotting down some of my reflections - more monograph than autobiography, it's been an interesting exercise. I concluded that at my stage of life I should put pen to paper while I still could if for no other reason than to tell my side of the story. Also it's an opportunity to correct a few of the more outlandish claims that have been made about me from time to time. I also wanted my children to know and understand what motivated and inspired their father in public life. I don't expect either Jack or Madeleine to follow me into politics but at least they will know why I chose that path.

I lost count of people who suggested I write a book about my political career. I have been reluctant until recently to commit much to paper save write the occasional article or commentary. I have earned the odd reference in the writings of others over the years and not all have been to my liking. The only real way to respond in such circumstances is through the media over which one has little control or in a more considered way write your own story. Recently, I read with interest in the Australian Financial Review1 John Dawkins’ response to the Keating Interviews. It is an excellent reply that, over time, will be lost in the jumble of letters and articles that appear in our print media - you need to publish your own story or cop what others say. Peter Murphy was keen and toyed with the odd script over the years but his death put paid to that venture. Murf, as he was known to all who worked with him, had a profound influence on my public life. His premature death was a tragic loss, we have been denied his recollections of Territory politics by his untimely departure. I always thought a book on Territory politics jointly authored by the late Alistair Heatley2 and Peter Murphy would have had no contemporary equal. Sadly, both are now lost to us. In any event, if I was to write a book it wouldn’t just be about politics. My political and public career should to be seen in the context of where I came from and what shaped my upbringing.

What finally dragged me over the line to write something was three fold - first, I thought it important to publish my father and mother’s contribution to our community of Wodonga before all was lost in time. Second, I was appointed a director of a UK publishing company3 which includes a number of political biographies chronicling important social and political events in the UK largely ignored by a world of media in transition. It all made sense to get something down on paper while I could. Third, I disagreed about certain recollections of others in their memoirs and realized the most effective way to correct the record is to write my own story in one form or another. As time has drifted by it is patently clear that no one defends your political legacy - that is a matter entirely for you.

An old colleague implored me not to do it. In his words:

'’The media will extract only that which is sensational. The rest, as far as the average punter is concerned, is wasted ink.’’

He predicted that a number of pages would cause a sensation while the rest of the book will have holes put in its pages and be strung to dunny doors. As my publication is on-line ‘I’d like to see that’. Of course ‘Aunty’ will have a go - I’d be disappointed if the ABC didn’t. There will be no shortage of people who will take up the opportunity to put a contrary view and sink the slipper in. I am not deterred by such a prospect; it is little different from when I have had to respond with a sense of exasperation to some stupid misinformed commentary about something I supposedly did or didn’t do in my public life.

Many political biographies are self-serving attempts to re-write history. I did not want to engage in an exercise of mythology or for that matter a hagiography. I made my mistakes and I had my victories. I wasn’t everyone’s ‘cup of tea’. Memory can be a poor substitute particularly when supported by selective media clippings, commentaries and photographs. In my Archives I have put up all I have in my possession unsanitized - including some of the more uncomplimentary commentaries and cartoons. Quite frankly, at my stage of life I don’t care what people think, I know who I am and what I achieved. I don’t need the approval of others or some ‘half baked scribe’ who has never employed another person or taken a risk in their lifetime to sing my praises or dissect my contribution. Some people write autobiographies, others conscript biographers and others again participate in selective interviews to tell their story. All add to the fabric of Australian political history and should be encouraged. Like John Dawkins, I found the ABC Interviews of Paul Keating4 by Kerry O’Brien mildly entertaining but somewhat thin - he can tell a better story than that. Paul owes it to the nation to tell us what he really thinks.

As I started the mammoth task of organizing my Archives some considerable time back I realized that, stand alone, they were incomplete; at the very least a narrative of sorts would give context. My participation in ‘Premiers Past’5 brought home to me the importance of telling my story and being open and frank about the political journey. I was surprised at the level of interest and controversy the interview generated. I took it all in my stride as I am pretty laid back these days and despite what some might think don’t take myself too seriously. I have worked to keep my sense of humour and perspective. I didn’t always succeed in office and on occasion was overtaken by the hubris that besets most leaders. When I was elected Chief Minister, Dave Tuzewski from Alice Springs urged me to keep a diary. I didn’t as such, however, I kept most bits of paper, scribbled down notes and documented significant milestones. I am a ‘collector’ as will be evident from the website.

I was then confronted with how to present My Story - how to publish. I have no desire to take a place in the bargain basements of Australia’s department stores along with other supposed luminaries. I decided that my recollection of events – personal, family and political - would take a different form. The online commentary was for me the ideal medium. It offers the opportunity to correct the record if I get it wrong in my memory or my interpretation of events. Online also offers the opportunity to add to what I did next without attempting a second or subsequent edition. Without rancour or a sense of settling scores, I have ‘put pen to paper’ to sketch out my history, where I came from and what I believe I achieved. I hope that people in their generosity might concede that I made a contribution and left behind a legacy that endures.

My ‘political’ career began when I first put my hand up for class captain in primary school. Moderately successful in those early contests I soon worked out that lollies were a reliable incentive to win the vote. The Romans understood the importance of the Circus and bread and not much has changed. I also came to understand that there is no free ride - you ‘catch and kill your own’. People who expect it on a platter are destined to fail. My first real political test occurred at Wodonga High School.

As a form 5 student I campaigned for and won President of the Student Representative Council. It was meant to be won by my senior, a sixth form student, what we call year 12 today. The SRC President was traditionally made a school prefect. At first my election was denied by the Senior Master of the School and hell would freeze over before I would be made a prefect. He didn’t like me for his own reasons, fortunately he didn’t prevail. That was the first real test of my determination and perseverance. Those qualities had been deeply imbued in me by my early Catholic education; the Christian Brothers in primary school ‘topped’ up by the de la Salle Brothers in Junior Secondary.

According to the ‘brothers’, Catholics needed to be more determined than the rest; the mantra was that we needed to prepare for the knocks in life, the disappointments and setbacks because we were Catholic (or if you subscribe to the sneering nomenclature of journalist David Marr, Roman Catholics with an accentuated R). It was a different era in Australia of sectarian sentiment now largely gone and forgotten. I remain grateful to the ‘brothers’ for that schooling because I came to understand at an early age that you had to fight for what you wanted. Good men all the ‘brothers’, notwithstanding the few who have brought great disgrace and condemnation on their communities; in the main they helped shape Australia. People like me owe a debt to the ‘monks’ who gave many a Catholic youth a steely determination to have a go. It is very disappointing that a few more people don’t stand up for the ‘brothers’.