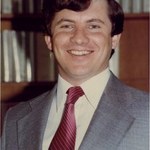 Despite all the other uncertainty and instability whirling around me on a personal level there was one constant - political involvement. Others similarly placed to me would go to the pub, play a game of footy or belt a cricket ball - I went to political meetings. From the age of 18 I was a political activist first with the Country Party and later the Liberal party. I didn't start out in a youth wing, it was straight in the deep end of mainstream branch activity. Political parties are full of tragics - the mad, bad, sad and the lonely - but without them a functioning democracy struggles.

I commenced my party political career in Victoria in 1968, initially with the Country Party1 in support of my late father Les Stone who, at the time, was Shire President of Wodonga. He would go onto become the first Mayor of Wodonga and first part-time Member of the Albury Wodonga Development Corporation.

My father had been persuaded by the National Party hierarchy to contest the Murray Valley preselection following the retirement of Parliamentary Leader George Moss. It turned out to be an ill-conceived plan that ended badly.2 He was defeated by the young up and coming Bill Baxter for the pre-selection. Dad stayed the course with local government and went onto become the first Mayor of Wodonga. Notwithstanding dad’s disappointment, I continued with my National Party involvement. My first public tilt was at the Wodonga City Council in 1974 after I had returned home to start my teaching career.3 My attempt in 1977 to win National Party preselection for the Legislative Council seat of North East Province also ended in defeat.4 Despite the propaganda war waged against me in the NT by my detractors and political opponents, I had never stood for Parliament before coming to the Territory. I had stood for pre-selection on a single occasion.

In 1978 I moved to Melbourne and, three years on, joined the Liberal Party in Melbourne.5 However, I maintained my Country Party ‘threads’ and throughout my political activity have sought to model my career on iconic Country Party figures whose personal style (not all their policies) I came to admire. There was something about those old fashioned agrarian socialists that marked them out as a ‘man’s man’.6 In Melbourne, I was elected President of the Surrey Hills Branch of the Liberal Party and State Conference Delegate. My political involvement at that time was secondary to my law career. Josie and I worked hard to make something of the Surrey Hills branch; we co-opted Phil Barresi to the cause. Local MLC Haddon Storey and his wife Cecile were very supportive. Later, Haddon and I would share the common interest of the Arts portfolio. He was a man I greatly respected. One of our local members, Jeff Kennett, was largely invisible, something I would remind him of when our paths crossed in Government. It was during the Costello Kroger ascendancy in Victoria that I concluded that I had few prospects for a political career as I was not aligned with the Kroger allies.7 This is somewhat ironic thirty years on as today I consider that I enjoy a good relationship with Michael Kroger; had we got to know each back then other things might have been different. I also had a chance meeting with the Northern Territory’s first Chief Minister Paul Everingham who had encouraged me to look north. He was full of enthusiasm and self belief - I liked what I saw.

Political views are shaped and moulded over time. One isn’t born with a political philosophy, you might be a ‘rusted on voter’ because that’s the way your parents voted but, invariably, life’s experiences, family antecedents and self-interest drive political allegiance. This is what makes the phenomena of the ‘Howard battlers’ in west Sydney so remarkable. Imagine the ALP winning over the good burghers of Toorak and Vaucluse.

I was never the ideologue, more the pragmatist so it was inevitable that I would join the conservative cause, the ‘center right’ or ‘the Tories’ as my Labor friends remind me. Some have paid me the ultimate accolade as a ‘conviction politician’ - supporters and foes alike.8 I always said what I meant and did what I said - popularity was never high on my agenda. Being wedded to an ideology wouldn’t have worked with me. It is my belief that I am an instinctive politician and on most occasions have a good sense of what will fly with the electorate. I proved that in the Territory and since in successive Federal election campaigns, including the most recent Federal election in 2013.

I’m generally regarded as ‘on the right’, but not slavishly so. I never participated in any of those quasi factional activities in the Liberal Party involving either the ‘black hand’ dinners or ‘the right’ equivalents. I am hawkish on foreign affairs and defence but more social liberal on domestic policy. If not for ‘the split’9 I may well have ended up in the ALP.

My family’s Collingwood antecedents, the documented poverty of previous generations, our Catholic heritage, the family’s Labor affiliations and growing up on a public housing estate attending State Schools all pointed to a disposition towards Labor. I articulated this history and background in my Maiden Speech in December 1990.10 Instead, I would ultimately find a place in the Party of Bob Menzies. For me, three factors came into play; first my father’s antipathy towards Labor and support for Bob Santamaria’s National Civic Council.11 My father was not a member of the DLP but he subscribed to the view that the Catholic Church was locked in a battle with Communism and the ALP had picked the wrong side.12 Second, my introduction to conservative politics through the Country Party comprised of people I identified with, especially farmers and small businessmen. This contrasted sharply with their Liberal counterparts. Third, I found in the NT CLP a diverse group of people from similar backgrounds who represented the merged Liberal and Country Parties with a big dose of political pragmatism thrown in. In my assessment, I ended up where I was meant to be.

There is no doubt that my father’s sense of social responsibility rubbed off on me - in another time he would have made the perfect socialist. However, once the alignment of Catholics with the ALP was smashed by ‘the split’, Australian politics, over time, re-aligned. A Catholic Liberal Prime Minister would have seemed improbable in the 1950’s (an ex-seminarian to boot). My father lived a simple life. Dad disavowed wealth and disapproved of the well to do as not caring about the poor - a reflection and reminder of where he came from. He subscribed to the view that wealth brought with it the responsibility to help others. Nowadays, we call it ‘mutual obligation’. Dad had a favourite saying that summed up his view on the wealthy:

“It is easier for a camel to pass through the eye of a needle than for a rich man to enter the Kingdom of God”.

The CLP comprised ordinary people - a mix of the trades , professions and small business. Unlike Melbourne and Sydney, Darwin doesn’t have a Toorak or Vaucluse in the way those suburbs define people of infleunce, schooling and connections. In the NT, people mix in across the social divide; no one asks what school you went to or what your father did. From the moment I arrived in the Territory I had a sense and belief that you could be anything that you wanted to be. My style of politics and personality was a perfect fit In the CLP.

Within the CLP family, over-time I was defined by my style and traits. I have always been ‘tribal’; loyal to those who supported me through thick and thin, renowned for my ‘pick and stick’ approach. I would go on to prove that determination and hard-work will always triumph against all else in the political arena. President Coolidge was on the money with his observation:

‘’Persistence and determination alone are omnipotent’’.

Next: Chapter 6: The Law