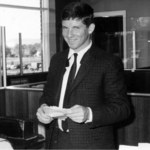 Never give up on yourself or your children. Not everyone has a rails run in life, its a mixed bag for most. I have lived by the ethos 'Persistence and determine alone are omnipotent'. You never want to die wondering - best to have tried and failed rather than never have tried at all (with apologies to Alfred Lord Tennyson). Have a swing - you may surprise yourself. There's no such word as 'can't' as my dad used to tell me.

On my return to study at the Australian National University, I demonstrated a new found application and discipline reflected in a string of academic achievements in contrast to my previous failures. To be frank, when I started in February 1976 I was full of self-doubt and terrified of failure - you might say I was highly motivated to step up. In any event, in my first year I cut through. Probation in Arts gave way to enrollment in Arts and Law. In 1977 I was the top undergraduate student in Contemporary Chinese Studies (I specialized in Marxist Leninist dogma1 in the Chinese school curriculum) having previously excelled in a number of undergraduate sociology and politics programs including a top of class High Distinction and a string of Distinctions in the Bachelor of Arts. I was also getting respectable results in my law course. My arts course was peppered with politics and sociology subjects and I lived every minute engrossed in the subject matter. I came to understand why some people never leave the cloistered surrounds of university life - it is captivating and safe. I enthusiastically read the classical works of Alexis de Tocqueville, Machiavelli, Edmund Burke, Max Weber, Marx, john Stuart Mills and Bernstein. They all had one thing in common - these great theorists all to a different degree never fulfilled their destinies in the public arena. It would be unfair to dismiss such great thinkers and writers as failures or resort to the cliche:

Men of reflection, intellect and scholarship gave substance to the road map that people like me adopted as my own. I was privileged to be lectured by Professor Les Crisp appointed Chifley’s director-general of postwar reconstruction in 1949. Like my father, Crisp spoke of how growing up in the Depression years shaped his world view which included a lifelong membership of the Australian Labor Party. He was open and frank that his political allegiance coloured his teaching, nonetheless he was a walking talking record of an important part of Australia’s history and I never missed his lectures. He was at times a crusty old coot but indulged those of us who wanted to spend time talking politics, including a ‘Tory’ like me. He retired from the ANU in my final Arts year - a great man although not of my political persuasion. One of his recommended texts was ‘The Crossman Diaries’ kept by Richard Crossman who served one term in the UK Wilson Labor Government. The diaries were, in part, an inspiration for the satirical British sitcom ‘Yes Minister’ - an alarmingly accurate portrayal of Westminster Government I was to discover. In Contemporary Chinese studies I was presented with the opportunity to meet the great C.P Fitzgerald, the famous ‘China watcher’ who was there for the aftermath of the Boxer Rebellion, the fall of the Qing Dynasty, the rise of the First Republic and Sun Yat-sen. Also, his name sake Stephen Fitzgerald our first Ambassador to ‘Red China’. Later, Stephen and I would work together in advancing the interests of the NT in China and I would serve on his Advisory Board of the Asia-Australia Institute at the University of New South Wales. Under the watchful tutelage of Professor Rafe de Crespigny I learnt a great deal about China that would later underpin my successful engagement in that country. Despite the best efforts of Professor Jerzy aka George Zubrzycki to persuade me to embark on an academic career in sociology I stayed the course in law - I was tempted.

At ANU I lived in residence at John XXIII College first as a student and in the following year as a resident tutor 1976 to 1977.2 John XXIII was also home to a number of Liberal wanabees who made it – Phil Barresi,3 Andrew Tink4 and Michael Yabsley5 to name three. A number of others went onto distinguished careers in business and the diplomatic service, for example Ambassador Frank Ingruber.6 Kevin Rudd would end up next door at Burgmann College.

We had a great time at ANU and I look back on those two years with fond memories and great affection - including my tenure as the bar manager. It was at John XXIII College that I met first year law student Josephine Novak in 1976. We married later that same year after a whirlwind romance and transferred our studies to Melbourne where I was paying off a small apartment dating from my time at the Institute of Catholic Education. It seemed the sensible thing to do since staying in college as a married couple was hardly ideal. I also wanted to prove to Melbourne Law School that I could more than handle their course. Josephine’s near perfect score in her HSC guaranteed her Melbourne entry; apparently she was smarter than me. Melbourne admission was on the basis of my university results alone. In my final year at Melbourne Law School I obtained a solid pass degree and First Class Honours and equal first place in the subject Problems of Proof (advanced evidence) and shared the George Maddern Exhibition. As it transpired, I ended up with degrees from ANU and Melbourne – two of Australia’s finest universities, later adding Adelaide.

Living back in Melbourne under our own roof was great fun. You can live on pizza, spaghetti and cheap red wine economically for a long time. I rode my bike from South Yarra to Melbourne University in Parkville; I maintained a high level of fitness and lived a happy and contented life. The money had started to run out so Josephine went to work and part time uni to support my studies. We took turnabout until we both graduated. In 1979, while still completing our law studies, I joined the staff at International House Melbourne University7 as Director of Studies.8 Josephine and I count our three years at International House among the most memorable in our married life. A sad part of our time at International House was the death of Malaysian student Teoh who took his own life. He slipped a note under my door with a key advising that when I awoke he would be gone. I raced to his room, he was lying on the floor having placed a plastic bag over his head. I tried frantically to resuscitate him amidst the tears and the anguish. I was too late. Teoh had failed his university course and, rather than return home to Malaysia in disgrace, had decided to end his life. He had been prominent in the life of the college and much loved by many. Josie and I established an annual award in his memory. Otherwise, great events such as ‘Cafe International’, cultural nights, formal diners and sporting events contributed greatly to lasting and enduring memories.

Our experiences at International House built upon our exposure to students from the Asia Pacific region at John XXIII College at the Australian National University. These experiences would be the foundation of my commitment to the Asia Pacific later finding expression in my various roles in Government and, subsequently, in my work with the IDU9 and ICAPP10 on behalf of the Liberal Party of Australia.

I look back on it all and wonder what I might have achieved academically had I been more mature and disciplined in those early years after school. My academic failures were all of my own doing. I let myself and my parents down in a way that can never be truly recovered. That said, the lesson for all parents is to be supportive, and never give up hope in your kids. A poor year 12 result is not the end of the world although it seems like it at the time; don’t fear academic failure but rather learn from it. The ‘’phoenix out of the ashes’’ does happen. I regret my father didn’t live to see it. Despite dad’s obvious disappointment he never gave up on me and simply kept urging that I do my best. I was a bit slow hearing that plea.

Having patted myself on the back I remain forever mindful that a successful education in itself doesn’t always translate into success. Sir Reginald Ansett (Australian pioneer aviator and founder of Ansett Airlines) lived by a quote from US President Calvin Coolidge:

'’Nothing in this world can take the place of persistence. Talent will not: nothing is more common than unsuccessful people with talent. Genius will not: unrewarded genius is almost a proverb. Education will not: the world is full of educated derelicts. Persistence and determine alone are omnipotent. The slogan ‘press on’ has solved and will always solve the problems of the human race’’.

Years ago I reproduced the quote, had it framed and hung in my office. It’s not an exercise in anti-intellectualism but rather a reality check; ask yourself, how many honours graduates are duds?

Despite my a slow start - a generous description - I had become highly credentialed and academically qualified. A political ‘opportunity’ presented when my late fathers friend and mentor the National Party member for North East Province in the Victorian Parliament Keith Bradbury, contacted me to ask whether I was interested in contesting his seat. Keith, after decades of service, had decided to retire. He believed me a suitable replacement subject to winning the pre-selection. I recall during the pre-selection, which took the format of near on 500 party members formed up as a ‘town hall’ forum, being challenged as to whether I was ‘too educated’ for the job. I was gob smacked by the question, worse, it received wide applause in the room.20 This reaction caused me to carefully frame the way I presented myself in the political fray going forward. I also decided to be careful in the way I engaged with media when it came to qualifications. Later, in the NT I read the ‘tea leaves’ and Peter Murphy, my long-time confidant, agreed.

Don’t ‘bung it on’ and when dealing with the media, best to be ‘folksy’ and disarming and not too forthcoming - the media are not there to make you look good. I never shared my academic credentials with media or made a big deal about my qualifications with colleagues. I never used my post-nominals in public other than to say I had been a teacher and was a qualified lawyer - politics is full of them so I blended in. At times I had my own doubts about people with lots of qualifications and refined accents who spoke flawless English. Having left the political arena for the commercial world I have no such hesitation in using my post-nominals - it’s another world driven by different imperatives.

However, I’m getting ahead of myself. My political career had been well and truly launched back in Wodonga.

Next: Chapter 5: Starting Out