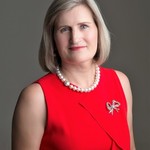 Mother, wife, graduate of Melbourne Law School (University of Melbourne), the first of her family to earn a tertiary education. Of WWII migrant stock, her father from Slovenia and mother from Croatia, Yugoslavia. Following her distinguished career in law and contribution to charitable not for profit causes Josephine was conferred a Member of the Order of Australia. A continuing member of the Council of the Australian War Memorial Josephine was conferred by the Ethiopian Crown Council, Dame Grand Cross of the Imperial Order of the Star of Honour of Ethiopia with jewels.

Josephine Stone was born to a migrant family who fled their homeland Yugoslavia after the Second War. The father Miroslav had fought with the partisans in Yugoslavia and had come to Australia via Italy then to the Bonegilla Migrant camp near Wodonga. The mother with her family fled Croatia during the war and had spent several years in camps in Italy and Germany before arriving in Australia. Miro and Anna met in Wagga and married. Josephine was born 1959, the second youngest of five children. She grew up in modest circumstances and attended the local Parish School, Sacred Heart at Kooringal, Mt. Erin Junior Secondary and later Trinity College Wagga, a co educational senior secondary college jointly run by the Presentation Nuns and the Christian Brothers. In 1976 Josephine graduated Dux of Trinity College and was admitted to study Law at the Australian National University. Josephine was the first of her immigrant family to gain admission to an Australian University.

In 1977 Josephine entered into residence at John XXIII College at ANU where she met fellow law student Shane Stone. They were married in November of that year. Both transferred their studies to Melbourne University in 1978. In 1979 Shane was appointed Director of Studies at International House, Melbourne University. Josephine was appointed a tutor with special pastoral responsibilities in support of her husband’s role. Both worked closely with overseas students who comprised half of the student residence. They remained in residence 3 years. During that time Josephine assisted overseas students many of whom were a long way from home and often had great difficulty adapting to the Australian environment. Later many of those threads and networks were reactivated during Shane’s tenure as Minister for Asian Relations and Trade and as Chief Minister.

Josephine initially continued full time in her law studies then went part time to support her husband Shane to complete his degree. They took turn about supporting each other and Josephine graduated Bachelor of Law in 19831. In 1984 Josie completed the Leo Cussen Institute for Continuing Legal Education (articles for admission as a legal practitioner in Victoria). She was subsequently admitted Barrister & Solicitor (Victoria), Barrister State of Tasmania, Legal Practitioner Federal Court and High Court of Australia and Legal Practitioner Northern Territory. Josephine was the first of her immigrant family to achieve a tertiary education. Josephine initially gained employment as an employee solicitor with Melbourne law firm Landers & Rogers specialising in the old Victorian workers compensation jurisdiction.

In 1985 Josephine and Shane moved to Alice Springs where they joined the law firm Loftus & Cameron. Shortly thereafter they purchased the practice and renamed it Stone & Stone. Later they merged the practice with another local firm and renamed the firm Buckley & Stone. While in Alice Springs Josephine threw herself enthusiastically into the community. She was an active participant in Zonta and also Rotary (Mbantua Club) in support of her husbands involvement. Throughout she practiced full time as a partner in the respective law firms. She was one of a few female practitioners who had achieved a full partnership of a Territory law firm at that juncture.

Josephine also served on the Women’s Advisory Council (Ministerial Advisory Council appointed by the Chief Minister of the day), a volunteer group advising the Government on women’s issues. Together with some others of like mind she steered the Council towards important reforms relating to women’s superannuation (later enacted by the Perron and Stone Governments), senior executive careers for Territory women in the NT public service (embraced and supported by the Hatton, Perron and Stone Governments) and enhanced childcare for working mothers (implemented by the Stone Government). Policies were underpinned by legislation and remain part of Territory Government policy to this day.

In 1989 Shane and Josephine Stone moved north to open the Darwin branch of Buckley & Stone. This proved a successful venture and the firm styled Morgan Buckley became one of Darwin’s largest with offices in both major population centres – Darwin and Alice Springs. Later the firm would merge with Cridlands to become Cridlands MB. Josephine initially retained her full partnership in the new enlarged practice of Morgan Buckley. That same year 1989 the couple’s first child Jack was born. In late 1990 Shane was elected to the Legislative Assembly and was immediately appointed to the Ministry by Chief Minister Marshall Perron. Josephine meanwhile had left the practice of Buckley & Stone. She gained a position as solicitor with the Office of The Australian Government Solicitor (then called the Commonwealth Attorney Generals Office). She later gained an appointment as a senior practitioner with the Northern Territory Legal Aid Commission where she held the position of Manager of Assignments and Deputy Director. Her professional career was however complicated by Shane’s appointment as Attorney General. Notwithstanding she continued to work in the profession and at the same time supported her husband’s career first as Minister 1990 to 1995 and as Chief Minister 1995 to 1999.

Josephine and Shane’s second child Madeleine was born in 1996. During the latter period as the Territory’s First Lady Josephine threw herself enthusiastically into supporting community events and activities. She worked tirelessly by her husbands side within the Territory, interstate and overseas. His achievements were her achievements.

Following the devastating Katherine floods in 1996 Josephine was invited to Chair the Red Cross Appeal. It was the most successful appeal in the Territory’s history at that time as Josephine prevailed upon Australia’s ‘Captains of Industry’ to support the Katherine Community using her many contacts and an extensive network developed through her husband’s role. It was but one example of her ability to manage her job, her responsibilities as mother and wife and at the same time perform as the Territory First Lady.

On Shane’s retirement as Chief Minister Josephine’s career took a different turn on her appointment to head up the office of Ethics & Professional Standards of the Northern Territory Law Society. She was the inaugural incumbent and was handed the task of setting in place processes and procedures that had not before been followed or enforced with any degree of consistency or procedural fairness in times past. She was at the cutting edge of developing a whole new approach to professional conduct and ethics in the Northern Territory legal profession. It has been said that until Josephine Stone applied her considerable talents to this difficult and challenging area neither the public nor profession were well served by the existing system in place.

In the interim Josephine maintained an active engagement at the Primary school attended by both Jack and Madeleine. Over 10 years she served on the St. Mary’s school council, fundraising committee and alumni association which she founded. In the latter capacity she spearheaded the commissioning of the schools history to coincide with its centenary celebrations in 2008. It was also the centenary of the OLSH Sisters who founded and ran St. Mary’s up until 2005. She has successfully fundraised for the school from both the public and private sectors. The very same networks she used to support the Red Cross Appeal were revisited and pursued relentlessly with great effect. Josephine’s involvement with St. Mary’s School Council and Alumni Association culminating in publication of the St. Mary’s Centenary publication2 rounded off a decade long association with the school.

Josephine was highly regarded and respected in the Territory community. She managed to stay above the political fray and in the process earned the regard of both sides of politics as someone who has always put the community first. She always conducted herself with great dignity and style. Her humble and modest background as a child of world war two refugees has defined her compassion and support for those less fortunate than herself.

People learn by example and Josephine has set a cracking pace over 30 years as an outstanding role model for Territory women – in her profession, in her community work, in her devotion to her family and in taking her place as the Territory’s First Lady.

Josephine was conferred a Member of the Order of Australia on Queen’s Birthday 11 June 20073. Her citation read:

'’For service to the community of the Northern Territory, and to the law’’

Josephine spends her time between Darwin and Brisbane and had an active involvement in her daughter Madeleine’s schooling at Stuartholme School of the Sacred Heart Brisbane. She is otherwise active in the QLD LNP and in November 2017 was made an Honorary Life Member of the CLP in recognition of her service to the Territory. Josephine assists in fundraising for both and is a donor in her own right.